Leprosy is one of the oldest diseases known to man. Early writings such as the Hearst Papyrus from Egypt (about 1500 B.C.) report on leprosy, which is described as Asian Disease. There are also texts in the Old Testament on what is described as leprosy, but this is probably a collective name for a number of different diseases. While there have been no cases of leprosy developing in Germany for decades (the last were two imported cases in 2010) there are about 250,000 new instances annually around the world. The greatest number of new cases may be found in India, with about 100,000, followed by Brazil with 40,000. In Europe there are a significant number of cases in the countries which used to belong to the Soviet Union. The number of persons who have suffered permanent damage and handicaps is about 4 million world-wide. Leprosy is a chronic infectious illness.

The virus involved is the Mykobacterium leprae, which was identified by the Norwegian government doctor Gerhard Henrik Hansen in 1873. For this reason it is also called Morbus Hansen. The bacteria multiply almost exclusively in the human body and due to the very long incubation period this is very slow. To this day an external cultivation has not been possible, and a vaccine does not exist. So far the transmission path is not completely certain, but is probably a so-called droplet infection through the nasopharnynx (upper part of the throat behind the nose). A pre-condition for an infection is a long-lasting and close contact to an untreated leper who is carrying a lot of bacteria.

Due to their inborn strong immune system up to about 95% of the world population cannot be infected with leprosy. The incubation period, the period between infection and the appearance of the first symptoms, is unusually long and is between 6 months and many (up to 40) years, but on average 4 years. A breakout of the illness is encouraged through: poor nutrition, insufficient hygiene, close living quarters and an insufficient genetic and environmentally influenced immunity. An undetected infection can remain without symptoms for years and even heal itself without any therapy. If there should be a further spread of the virus, it mainly affects the skin with the typical fleck-shaped changes and knots and the areas of poorer blood circulation and therefore cooler parts of the body such as the hands, feet, ears, and nose. The Mykobacterium lepra can establish itself particularly well in these cooler areas.

Other important areas of infection are the peripheral nerves with damage to the senses of touch, pain, temperature, and vibration. In these nerve infections there is a knot-like swelling of the nerve which can be easily detected by touch. The loss of the senses of pain and sensibility in the fingers and feet often lead at first only to minor injuries, but later there are infections. Due to sustained infection the bones may also be affected, which leads to the death and loss of extremities. Leprosy is one of the most important causes of serious eyesight problems right up to blindness, triggered by an infection of the eye by the leprosy virus.

One of the typical visible and very stigmatized forms of leprosy leads to an infection-related destruction of the nasal skeleton to form a so-called saddlenose, right up to the complete loss of the nose. A spread in the area of the head can lead to an appearance which resembles a lion. Leprosy can be divided into two main groups, one with relatively few bacteria, the other with a large number. The diagnose is usually made through the usual symptoms such as light or dark patches on the skin or knots, a thickening of the nerves which can be felt. This thickening is associated with loss of sensibility and muscular weakness. Mykobacterium leprae can be detected through various test procedures, such as the immune reaction to the virus in a skin test or evidence in nasal secretions. In a microscopic inspection of tissue typical changes can be seen. Since 1982 leprosy is considered by the WHO to be curable! Nowadays the therapy consists primarily of a standardized combined application of different antibiotics, the so-called multi-drug-therapy (MDT).

Depending on the form of the illness the therapy must be continued for six months to a year. 0ften cortisone is used in the further course of treatment. Astonishingly, so far the pathogen has not developed a resistance to the antibiotics being used. The World Health Organization (WHO) is directing the free distribution of the medicine world-wide. The products are being provided free of charge by the pharmaceutical companies Novartis, Sandoz, and the Stiftung für nachhaltige Entwicklung (Novartis). This has enabled about 14 million cases of leprosy to be cured in the past 20 years.

Other important components of the therapy are complex treatment concepts involving plastic surgery (removal of mutilations which lead to stigmatization), physiotherapy and rehabilitation as well as measures for reintegration into normal social life. Additionally, infection prophylactics are fundamental for the prevention and elimination of leprosy. The St. Lazarus-Fonds is particularly dedicated to the questions of integration and re-socialisation in order to improve the living conditions of the sufferers and their families.

Noung was 42 years old when she noticed the knotty, red, skin changes.

The mother of four children ignored these first changes. When she was diagnosed with leprosy, or Hansenic Disease, as it is known today, her previous life was suddenly at an end. Noung fell out of the world. Her husband threw her out. Almost overnight she had to leave her family, her village, everything which had made up her life to that point.

Alone, avoided by everyone, she experienced what it means to be an outcast – to live with an illness which doesn’t just destroy the body, but every human relationship.

Noung found a new life in Phan Thiet Village, a non-profit leprosy station in Vietnam. When she leaves the house in the morning she knows that she may work, that she will meet other people. She receives medical care, has enough to eat, and a roof over her head. She experiences confirmation of her worth, and respect, and has also made new friends. However, she never saw her children again.

Leprosy is one of the oldest illnesses known to man. It has existed from the beginning of mankind through thousands of years right up to the present day. The oldest documents give proof of the existence of leprosy in India, China, Ethiopia, and Egypt. The most famous early historical source about the disease is the book Leviticus in the Old Testament. In Chapter 13, 1-46 the term Tsaraath is used, which is translated as leprosy. However, this does not correspond to the modern definition of leprosy, but is a collective term for different skin changes. The Old Testament has shaped the behaviour of the healthy towards those infected with their exclusion from society.

In the 3rd book of Moses 13, 45-46 we find the instructions: „anyone who is leprous should wear torn clothes and the hair loose and his beard covered and should call: unclean! Unclean! And as long as the leprosy is in him, he shall remain unclean, live alone, and live outside of the community.”

In the Greek/Roman antiquity doctors were familiar with the appearance of leprosy. This was also true in the Byzantine and Arabic cultural areas, as well as in Western Europe. There were many names for the illness at the time. Two of the most common names come from antiquity: elepfantiasis and leprosy. The name elepfantiasis in antique medical writing came from the symptoms, partly due to the leathery thickening of the skin in lepers, and partly due to the unusually intense suffering among those afflicted. The word “leprosy” can be found in the collected medical writings of the Greek classics, the Corpus Hippocraticum, as a description of a scaly illness.

This term has been used as the definitive name from the middle ages up to the present day. Even in antiquity there were attempts by doctors to classify the form of leprosy according to the form it took. Four types are known from this early period: Elephantica, Leonine, Tyria, and Alopecia. In these very early times lepers were completely isolated from healthy people. They were not treated or looked after. Due to fears of contagion all contact with them was avoided.

Only with the spread of Christianity did the attitude of the healthy to lepers changed, due to the commandment to love thy neighbour. More and more work on behalf of the lepers was even considered to be a service to the suffering Christ, such as with St. Elisabeth of Thüringen (1207 – 1231), who washed the wounds of the sufferers, and St. Franz of Assisi (1181 – 1231), who cared for the ill with love and respect.

Just as before, most people feared contact with lepers so much that from the 12th century onwards those lepers who had previously lived outside the city walls in field encampments were forcibly isolated. Nevertheless the number of lepers in the early middle ages rose threateningly. In order to prevent a further spread of the disease effectively, the III Lateran Council resolved in 1179 to strictly prohibit interaction between the lepers and the healthy. “Leprosi cum sanis habitare non possunt.” In this manner the lepers were stigmatized. They had to wear a kind of habit, the so-called Leper-habit, and must warn the healthly with accustic warning instruments when approaching. This took place with “warning bells”, later with a leper horn, or with a leper rattle. In order to prevent a direct contact with the healthy they had to wear gloves. Additionally they had to carry a cane with them, in order to indicate what they wanted when acquiring goods.

There were around 19,000 leperhouses in Europe in the 12th century. Admission to these houses was often done with force. In cases of doubt the suspected lepers had to withstand an examination, the so-called Examen leprosorum, the the inspection of the leper.

When admitted into the leper house the patient had to swear an oath of abstinence and obedience. The care of the lepers was done by the clergy. The houses were financed with the help of foundations and through donations. In the late middle ages leprosy started to retreat. There were several decisive factors: the strict isolation of the ill, so that the infection chain was broken, the catastrophic epidemics of the plague between 1350 and 1450, which took away the weakest in particular, and significantly improved hygienic conditions and improved nutrition, in which the introduction of the potato as a basic staple of nutrition played a significant role.

In 1873 there was an outstanding event in the history of leprosy. The Norwegian government doctor from Bergen, Gerhard Henrik Armauer Hansen (1841-1912) identified the leprosy virus, the Mycobacterium leprae, thereby proving that leprosy is an infectious disease. The long hoped-for turn in the struggle against leprosy finally took place in 1984. The World Health Organization (WHO) announced: 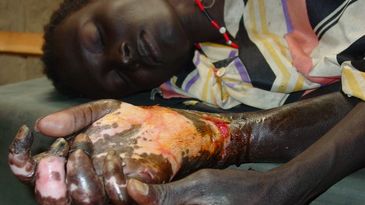 Leprosy is one of the oldest diseases known to man. Early writings such as the Hearst Papyrus from Egypt (about 1500 B.C.) report on leprosy, which is described as Asian Disease.
read more ►
2021: in July
Dear Members of the St. Lazarus-Fonds, Following the military coup in Myanmar in February 2021 a dramatic situation has developed in the diocese of a catholic priest who we have known for a long…
read more ►
Renovation of the Medical Building - finished 2021 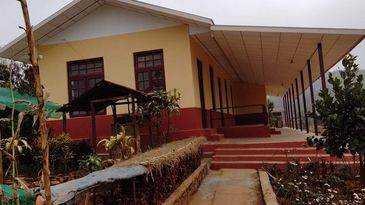 The renovation is finished! Excerpts from the  KMSS report: Early in 2021 the finishing touches were put on the boarding school medical building in the Hokai Village leper colony. The…
read more ►
In order to optimize our website for you and to be able to continuously improve it, we use cookies. By continuing to use the website, you agree to the use of cookies. For more information about cookies, please visit our Privacy Policy